Set a revised target of 151 in 16 overs after a brief spell of rain, Bangladesh fell short by five runs.

Written By
Press Trust Of India 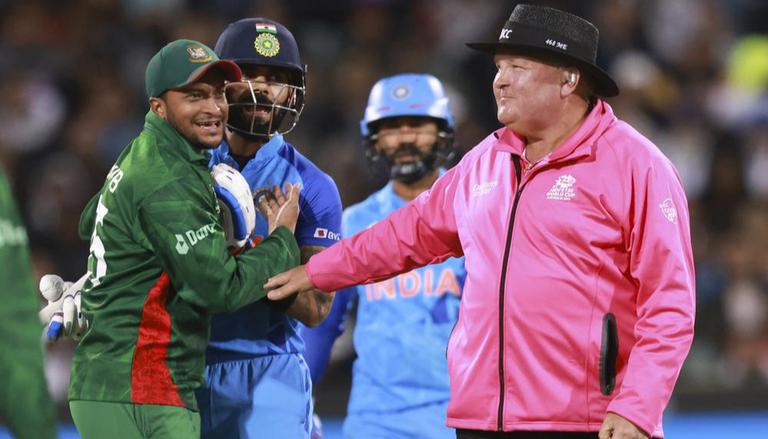 Set a revised target of 151 in 16 overs after a brief spell of rain, Bangladesh fell short by five runs.

While his skipper Shakib Al Hasan conceded that they lost fair and square, Nurul, who kept Bangladesh in the game in the final over with a six and a four off Arshdeep Singh, seemed to criticise the on-field umpires after the game.

"Definitely, the wet outfield did have an impact when we restarted the game. But there was also a fake throw which could have got us five runs but we didn't even get that," Nurul said in Bengali at the mixed zone, indirectly accusing umpires Chris Brown and Marais Erasmus of overlooking the incident.

The incident that Nurul was referring to happened in the seventh over. A video recording showed that Arshdeep threw the ball from the deep and Kohli -- at point -- feigned as if he were relaying it at the non-striker's end.

A relay throw is one where the fielder closer to the track catches the ball from deep and throws it at the stumps.

The ICC playing conditions rule 41.5, which pertains to unfair play, prohibits fielding team from "deliberate, distraction, deception or obstruction of the batter".

If the umpire finds any one has breached the rule, he can call it a dead ball and award five penalty runs.

While Nurul accused Kohli of fake fielding, he didn't factor in the terms "distraction and deception" part in the rule.

Neither Shanto nor Litton was looking at Kohli, and hence, they were not distracted or deceived.

On the contrary, there is a possibility that Nurul might be sanctioned for criticising the match officials.

(Disclaimer: This story is auto-generated from a syndicated feed; only the image & headline may have been reworked by www.republicworld.com)