The five runs that the Bangladesh cricket team should have received were for Virat Kohli's act of 'fake fielding' that went unnoticed by umpires. 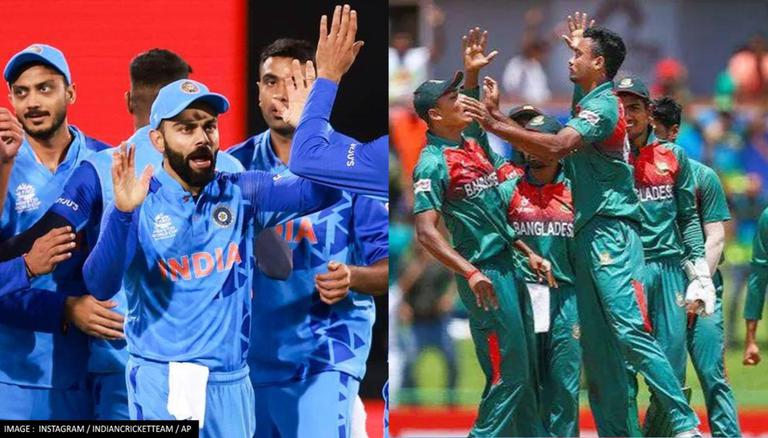 
In a must-win match at Adelaide Oval on Wednesday, Bangladesh came up short by 5 runs against Team India denting their chances of semi-final qualification at the T20 World Cup 2022. Bangladesh looked to be cruising towards the target at one stage only to choke post-rain break.  The rain-hit India vs Bangladesh T20 World Cup match also had some controversial moments as well.

The umpiring during India vs Bangladesh match came under scanner after Bangladesh vice-captain Nurul Hasan claimed in the post-match conference that they were denied five crucial runs which ultimately led to their defeat. Hasan went on to accuse ex-captain Virat Kohli  of 'fake fielding' that he claimed went unnoticed by on-field umpire Marais Erasmus.

While speaking to the press after the match, Bangladesh cricketer Hasan said, "We all saw that it was wet ground. Eventually, when we talk about these things, there was also a fake throw. It could have been a five-run penalty. That also could have gone our way, but unfortunately, even that didn't materialise."

READ | 'It was firmly Bangladesh’s game': How the cricket world reacted to India's stunning win

According to Law 41.5 of ICC, pertaining to unfair play, prohibits the "deliberate distraction, deception or obstruction of [the] batter", and if an incident is deemed to be a breach, the umpire can declare that particular delivery as dead ball, and award the batting side five runs. The video of the incident has gone viral and fans shared their thoughts about the incident. 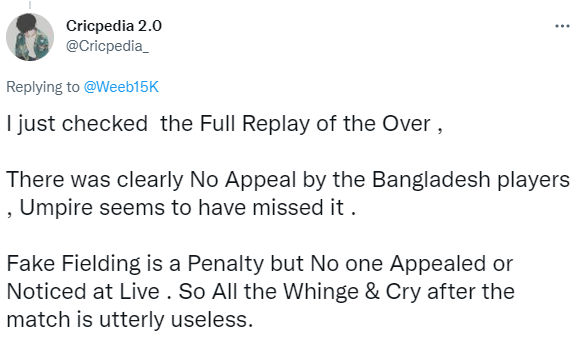 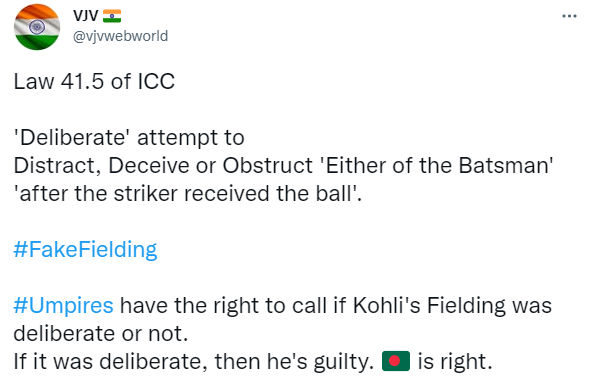 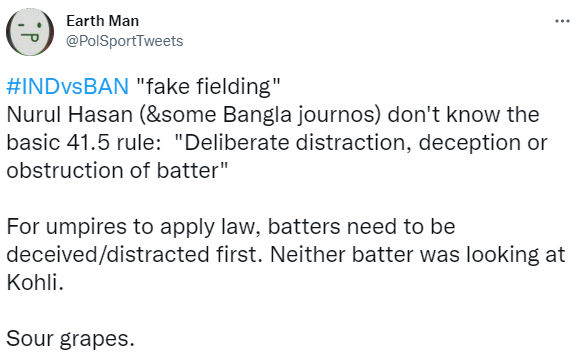 Chasing a 185-run target to win in Adelaide, Bangladesh looked to be cruising towards victory with Litton Das dominating Indian bowlers to score a half-century in merely 22 deliveries. However, the match turned its head post-rain break. KL Rahul's superb fielding effort saw Litton Das getting run out merely a ball into the play's restart. Once the opening partnership was broken, Bangladesh pressed the panic button and kept losing wickets eventually falling short of the target.

READ | KL Rahul reveals advice he sought from Virat Kohli before Bangladesh match; 'He has been doing something right'

Speaking about the loss to team India during the post-match press conference, Shakib Al Hasan said, “Yes. It has been the story when we play against India. We are almost there but we never finish the line. It was a good game of cricket, the crowd enjoyed it and both teams enjoyed it, and that's what we want. In the end, someone has to win and someone has to lose,”. Following the defeat at Adelaide Bangladesh remain third on the points table with four points in as many matches, while India jumped to the top of the table with six points in the bag.

READ | Kohli eclipses Tendulkar, shakes up record books with sublime fifty against Bangladesh
SUBSCRIBE TO US